As we enter into the first year of the new decade, we are proud to say we are marking a year of celebration of 70 years in business in the Irish paint market.

Where it all began

1950's Ireland was an era of austerity and resilience with a slight glimmer of optimism.
People learned to be resourceful and inventive, allowing nothing going to waste that could be used to preserve or create items for future use.
One such visionary who saw an opportunity for business was Mr Doyle and his two sons Brian and Conor Doyle.

Fleetwood Paints as we now know it, began in 1950 on Marlborough Street in Dublin's City Centre.
Mr. Doyle and his sons Brian and Conor perfected the art of making ferrules – the metal bands that hold brush bristles in place.
The Doyle brothers bought the surplus metal cut-offs from tins of Jacobs Afternoon Tea biscuits and transformed the scrap metal into a thriving business.

A Brush with Success

Fleetwood began to diversify.
The company started to make paintbrushes by hand and when they sold well, it moved into creating artists brushes and cosmetic brushes.

By the mid 1950, the Doyles were well positioned to open their first paintbrush factory in Cabra, Dublin 7.

As Ireland entered 1960, the worldwide economic boom brought along international trade and industry to the country and so once again, the Doyles were able to expand.
The paintbrushes were sold in Ireland and abroad which then brought the business to a two-acre site in Inchicore, Dublin 8.
Domestic sales were booming at this time and exports were totalling at more than half a million brushes.
Fleetwood was one of the first companies in Ireland to invest in R&D.
In the mid-1960s, Fleetwood took the then unusual step of hiring a chemist to develop fillers and wallpaper pastes. (The paste that emerged would 'stay stuck when others give up', as the advertising slogan had it.)

We welcomed the seventies in style!
Fleetwood was the largest manufacturer and supplier of DIY products in Ireland, a position it still holds to this day. The Doyle brothers were experiencing such phenomenal success within the paint industry with their hand-crafted paint brushes, that they expanded once more! Virginia, co. Cavan rolled out the red carpet and our main factory was opened in 1972 to make rollers and assemble frames.

Both Brian and Conor wanted a paint that would be worthy of the high standard of brushes they were producing and so they decided to make their own.
The Doyles partnered with US paint giant Sherwin Williams in 1977. By using the combined technology of both companies, together they brought the first can of Fleetwood Paint off the production line on Friday 12th January 1979 in Virginia, co. Cavan.

The proof is in the paint

From the beginning, Brian and Conor Doyle had prided themselves on producing paint of superior quality using leading edge technology.
They loved colour and design and wanted to bring a high standard of manufacturing to the paint business in Ireland.

As a company, we continue to invest in R&D to ensure that we are achieving the superior quality in our paints which we are known for. It is the use of only the finest raw materials and acrylic resins that gives our colours the richness and depth that makes them truly unique. We rely on our experience and expertise to develop paints that are not only rich in colour, but rich in innovation.

The people that make up Fleetwood Paints are an integral part to our story for without the continued dedication of our 130+ team of employees we would not be here celebrating our Platinum Jubilee.
We have 3rd generation of families in the company, with Conor Doyle’s son Alex as Commercial Director of the company.

A word from Mr Conor Doyle

On speaking with the founder Conor Doyle about what has kept Fleetwood Paints as the number one paint brand in Ireland for so long he advises that he vets every product that Fleetwood Paints puts on the shelves.

"I only give a product or paint the Fleetwood name if it is of the upmost superior quality. It will go on shelves when its signed off by all the departments and myself. I am incredibly proud of Fleetwood Paints and all that my father and my brother and I have achieved throughout the last 70 years. I am looking forward to seeing the company grow over the next decade and thank all the employees and customers of Fleetwood Paints for the support over this Platinum Jubilee.”
Conor Doyle, 2020. 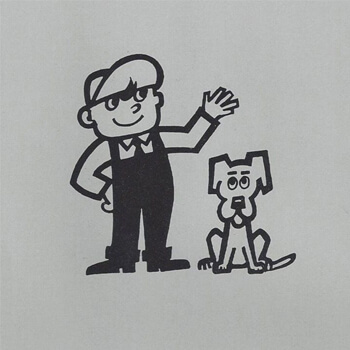 Freddie Fleetwood from our branding in 1980. 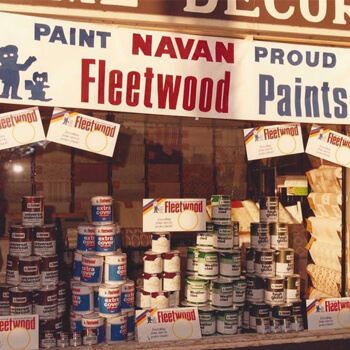 A store front we decorated for Home Decor Navan. 20 years on and we still have 'Everything from Start to Perfect Finish!'. 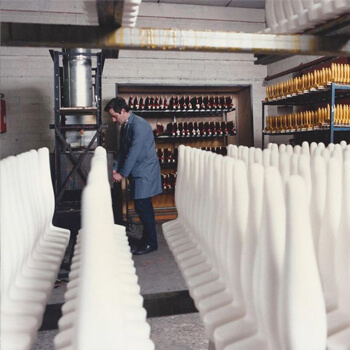 Rows and rows of brush handles waiting for their final finish in the factory in Virginia, Co. Cavan. Because they were hand-made Fleetwood brushes were regarded as the best on the market.

The very first time we saw Freddie Fleetwood on our logo! This is a cigarette lighter from 1952. 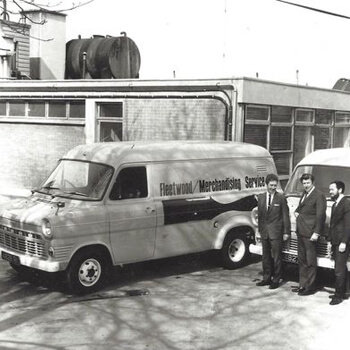 A vintage photo of a 1979 Fleetwood delivery from our factory in in Inchicore, Dublin 8 - back before we sold paint and were Ireland's leading brush and accessory manufacture. 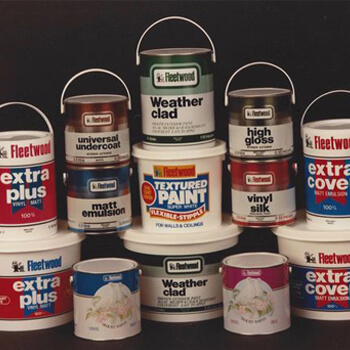 A flashback to Fleetwood's range of paint from the 1980's. We think some of the packaging designs have aged very well. 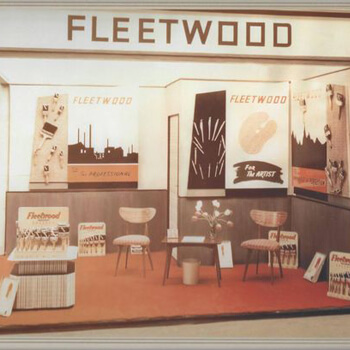 The Fleetwood Stand from the 1954 Dublin Horse Show in the RDS. 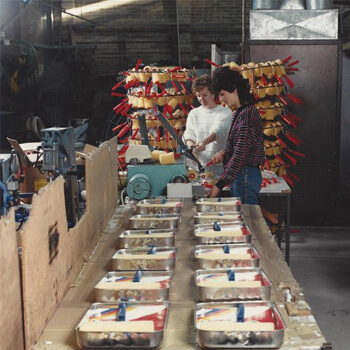 Here's a behind the scenes image of our roller sets being assembled in Virginia Co. Cavan. Circa 1970

No Fields Found.
Secured By miniOrange